BACKGROUND:  The competitive nature of matching in a US General Surgery program has led many fourth year medical students at our institution to seek additional opportunities for sub-internships at away programs of their choice.  Application to these programs most often result from interest in a particular institution, surgical sub-specialty and/or region, but acceptance rates for students can be incredibly varied. We sought to investigate whether there were any regional biases in acceptance rates for our applicants, and whether it correlated with a bias in the surgery match or if accepted applicants had higher match rates in those same regions.

METHODS:  A total of 328 applicants for sub-internships between academic years 2009-2017 were examined, of which 102 also proceeded to apply for a match in surgery.  All programs were listed as “General Surgery” and were stratified based on region, sub-region, and state.  Applicants were stratified as “accepted,” “denied,” “pending,” or “cancelled” and these were cross-tabulated with match results.  Statistical analysis performed utilizing a chi-squared test. 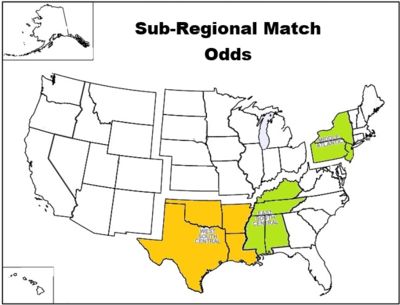 RESULTS:  Statistically-significant sub-region bias exists with the Northeast being less likely, and West North/South Central more likely to accept sub-internship applicants from West South Central sub-region.  Nonetheless, no bias in match rate was found for applicants previously having completed a sub-internship in these regions or sub-regions.  Conversely, analysis of sub-regions revealed a statistically-significant correlation between completing an away rotation and matching into a surgical program in mid-Atlantic and South East Central sub-regions.

CONCLUSION:  Bias in acceptance rates to sub-internships and limited correlation between doing a sub-internship and matching in the same or a nearby program suggests the money- and time- to-benefit ratio is significantly skewed.  As such, depending on the location, applicants should be cautious when relying on these rotations as a strategy to increase their odds of matching at a program of his or her choice.