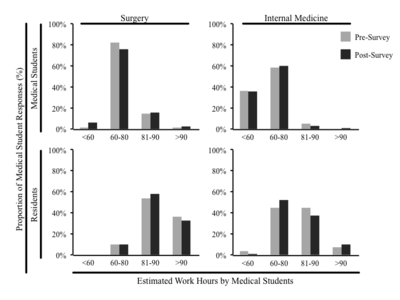 After the surgical clerkship, significantly fewer students considered “value in staying late for educational opportunity” as a reason for work hour violation (48%) compared to before the clerkship (60%, p=0.05), and there was a trend toward an increase in “lack of belief of work hour restriction” (pre-survey 35% vs. 45% post-survey, p=0.08).

Conclusion: Medical students anticipate that both medical and surgical residents work extended hours, though surgeons more frequently. This may be creating a confirmation bias as students estimate both their own and others’ work hours. More than a decade since the implementation of work hour restrictions, the folklore of the ever-working surgeon persists.