Introduction: Physician non-technical (NT) skills are critical to patient care, but emphasis and evaluation of these skills are limited in current medical education. Validated rating scales have been developed to assess NT skills such as the Oxford non-technical skills scale (NOTECHS) which evaluate constructs such as communication and decision making. The objective of this study was to determine if medical student clinical performance during a simulated acute care scenario (ACS) can be predicted using an adapted NOTECHS scale. 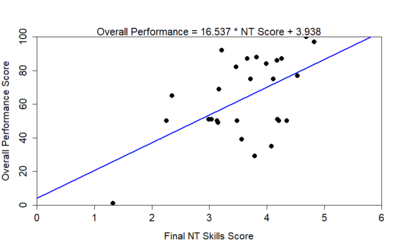 Conclusions: Medical student NT skills can significantly predict clinical performance during ACS. SA was a better predictor of performance than the final NT score and other individual constructs, which suggests that monitoring, understanding, and anticipating the team and patient are critical in successful performance in acute care settings. NT assessments provide deeper insight to how these constructs influence performance and can be used to focus training and provide specific feedback to trainees. Additional validation studies for this tool in ACTS is ongoing.