Objective: Uncontrolled bleeding is the leading cause of preventable death from trauma.  Life threatening hemorrhage can cause death within minutes, and arrival of pre-hospital personnel may be delayed due to safety concerns.  Non-medical bystanders are first on scene, but usually don’t act out of inexperience and fear of causing harm.  The Stop the Bleed campaign aims to teach laypeople Bleeding Control (BCon) techniques to save lives. We hypothesized that BCon training would increase willingness and preparedness to intervene.

Methods: Local school nurses (n=218), medical students (n=40), researchers and administrators (n=18) received BCon training by ACS certified instructors with Pre- and Post- training surveys to assess knowledge of trauma and hemorrhage, effectiveness of teaching (BCon knowledge acquisition), and participants’ willingness and preparedness to intervene to control bleeding in strangers following a mass casualty (Likert: 1 = Strongly Agree, 5 = Strongly Disagree).  Surveys were anonymous and paired. Incomplete or unpaired surveys were excluded from analysis, or if participant did not consent for inclusion.  Statistical significance was analyzed using T-test and Wilcoxon-signed ranked test, and was defined as p<0.05.

Results: 276 participated in training and 254 met study inclusion. Most of the participants (93% and 98%) were correct in the knowledge questions, which increased to 100% post training.  BCon knowledge acquisition improved following training, with a range of 11%-48% increase in correct answers.  Pre-workshop, a majority of the participants responded “agree” or “strongly agree” for willingness to help a bleeding stranger (median = 4, mode = 4); the majority responded “agree” for preparedness (median = 4, mode = 4).  After training, participants were more willing (median = 5, mode = 5) and felt significantly more prepared (median = 5, mode = 5), both of which were statistically significant.

Conclusion: BCon training was effective at delivering knowledge to learners, and the hands-on workshop significantly changed the attitude of both medical and non-medical trainees who were increasingly willing and prepared to intervene in a community setting to attempt to control bleeding and possibly prevent hemorrhagic death. 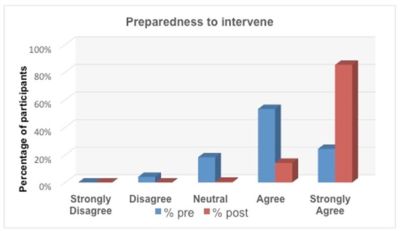