Introduction: Image guided procedures are commonly performed by surgeons. During these procedures, attention is split between the image (typically ultrasound), and the patient undergoing the procedure. Eye tracking has shown promise as a means to quantify and understand the development of surgical expertise.  The purpose of this study was to assess the homogeneity of gaze patterns of procedural experts, as well as to determine differences in gaze patterns between novices and experts in the placement of central venous catheters (CVC).

Conclusion:During ultrasound guided CVC placement, experts spend significantly more time focusing on the ultrasound screen and less time tracking the needle and probe. This difference would suggest that where one’s attention is directed during the procedure changes as more expertise is gained. Where one should be looking during image guided procedures represents a variable that can be measured, assessed, and taught as part of a curriculum in teaching image guided procedures. 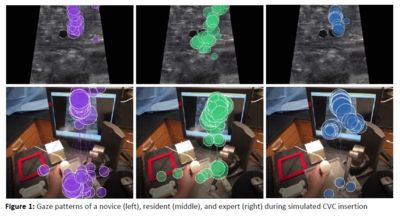