BACKGROUND: Video Assisted Thoracoscopic Surgery (VATS) is increasingly used to treat early stage lung cancer. Performing VATS requires extensive training and hands-on experience. Current surgical simulators do not bridge the gap between practice and proficiency. The objective of this study is to conduct a needs analysis study to assess the requirements for developing an enhanced VATS lobectomy simulator.

METHOD: An online survey was used to collect data at three academic institutions. The questionnaire assessed the existing commercial simulators for anatomic realism, interaction, and haptics on a continuous scale of 1- 5. It also assessed various features users would like to see in an enhanced simulator for VATS Lobectomy. Subjects were grouped into expert (attending) and novice (fellow and PGY 1-6). Both descriptive statistics and between group analysis was performed.

Subjects who had used the VR simulator rated anatomic realism, interaction and ergonomics at 3 on a 5 point scale when compared to real patients. For realism of instruments and haptics, the median rating was 3.5.  The results from needs analysis for developing a new simulator is summarized in the table.

There is a current gap in training for VATS procedures and current simulators lack functionalities and procedures that are desired by the survey participants. 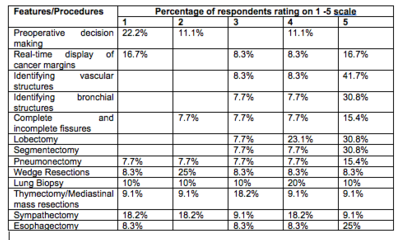