A survey was distributed via email to resident (n=9, 37.5% response) and attending physicians (n=10, 35% response) at one institution asking what factors are important in determining resident’s ability to do more in the OR on a 5-point Likert-scale. Bivariate analyses comparing responses by attending and resident physicians was conducted using Wilcoxon rank-sum tests. Power analysis showed that this study needed a sample size of more than 8 samples per group based on an alpha of 0.05, power of 0.80, and difference in Likert-scales being 0.5. 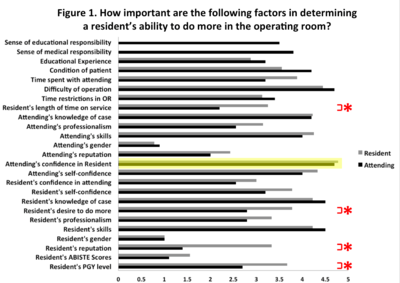 By both attending and resident physicians, the highest rated factor determining a resident’s ability to do more in the operating room was the attending’s confidence in the resident (attendings: 4.70, residents 4.78, p<0.71, Figure 1). Residents perceived that their PGY level (p<0.0097), their reputation (p<0.0005), their desire to do more (p<0.038), and their length of time on the service (p<0.014) were more important than what attendings perceived the importance to be.

This study demonstrates that several factors were of importance to residents and attendings in determining when a resident is allowed to be more autonomous in the OR. Residents may believe factors they can affect like their reputation or desire to do more are important in affecting their autonomy, but attending physicians believe otherwise. A key factor not highly investigated yet is that of the attending’s confidence in the resident. The focus of surgical education should be refined to improve attending’s confidence in the resident as a possible intervention to increase resident autonomy in the OR.